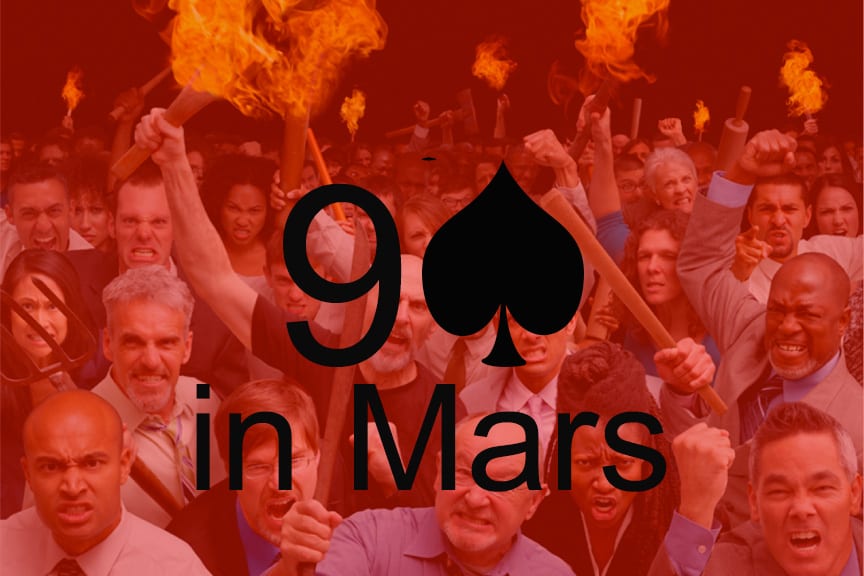 Last year the USA had a 9♠ in Jupiter, which lent to the deaths of many larger than life (Jupitarian) figures particularly many “father” and “father-figure” (Jupiter) type personalities. This year the 9♠ takes on a much more sinister position in my opinion, under the influence of Mars. So now we are speaking of deaths involving or as a result of Mars like institutions or people. While it’s characteristically one of the “death cards”, the 9♠ is also responsible for great healing as it can draw attention to things that throw the body or a person way off balance. In Mars, I would describe it as :

Mars represents the masculine or male-ruled institutions, like law enforcement, the military, etc – which in the USA has been a very volatile or unstable system riddled with controversy. Mars is the co-ruler of Scorpio the sign of death and transformation and we are approaching Scorpio – with Jupiter the magnifier there currently. At the moment we are seeing a serious sex scandal involving movie producer Harvey Weinstein (on a side note – has anyone noticed how we had two big “Harvey” stories this year? not a coincidence….). This is a great example of that 9♠ in Mars, digging up wounds and bringing what ails to the surface. This, in fact, is going to be the *beautiful* gift of this aspect – which will lead to healing (especially men) on a grand scale. Unfortunately, some events are going to have to pop off to allow this to occur.

Karma associated with the 9♠ in Mars

Aries and Scorpios need to be especially mindful in the areas of conflict, dating, sex, or dealing with law enforcement or the police.